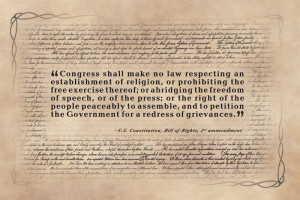 In today’s heated political climate in the U.S., arguments spread faster than mosquitos after a week of rain. I get a kick out of hearing someone tossing a sharply worded opinion, and then diving behind the defensive shield follow up       “ I have the right to Freedom of Speech”.  I had a nagging feeling it wasn’t so all inclusive and since my ancestors fought in that Revolution, I did some research.  Hopefully you, as an American, claim this right knowing it was granted in the first amendment to our constitution in 1789. The driving force was freedom of political dissent. Today in America there cannot be a law that limits your freedom of speech.  Here is the wording of the first amendment- one sentence of 45 words:

Congress shall make no law respecting an establishment of religion, or prohibiting the free exercise thereof; or abridging the freedom of speech, or of the press; or the right of the people peaceably to assemble, and to petition the government for a redress of grievances.

The author James Madison, meant it to be simple and basic so it would pass the vote. But, I feel, over 227 years later we really need to take responsibility for our words.  And to prove that, look at how lawsuits helped form new terms classifying exercising freedom of speech.

Words which would likely make the person whom they are addressed commit an act of violence.  Fighting words are a category of speech that is unprotected by the First Amendment.  Chaplinsky v New Hampshire, 315 U.S. 568 (1942).

A statement that injures a third party’s reputation. The tort of defamation includes both libel (written statements) and slander (spoken statements).

If you want to sue someone who you feel has defamed you to win a defamation case, a plaintiff must show four things: 1) a false statement purporting to be fact; 2) publication or communication of that statement to a third person; 3) fault amounting to at least negligence; and 4) damages, or some harm caused to the person or entity who is the subject of the statement.

Unless that person has Absolute Privilege

If a statement is made in certain contexts or in certain venues, the First Amendment may give the speaker an absolute defense to a charge of defamation.  This privilege usually only exists in the government context; for example, sworn testimony in a judicial or legislative hearing is privileged.

Libel is a method of defamation expressed by print, writing, pictures, signs, effigies, or any communication embodied in physical form that is injurious to a person’s reputation, exposes a person to public hatred, contempt or ridicule, or injures a person in his/her business or profession.

A false statement, usually made orally, which defames another person. Unlike libel, damages from slander are not presumed and must be proven by the party suing. See, e.g. TXO Production Corp. v. Alliance Resources, 509 U.S. 443 (1993).

So how about making it clear that you are speaking freely? There is a standard for that too. You are supposed to ask permission.

The history is during Operation Torch (invasion of North Africa in 1942) which took place under US command, British service personnel didn’t know how to address their American counterparts. Being British and polite, they said ‘Permission to speak freely sir.’

The only time I see that happen is working as a court interpreter when the witness, already on the stand,  will ask the Judge for permission to speak freely. Their attorney immediately turns pale with eyes as wide as a deer in headlights. I guess no one told them about Absolute Privilege.

Are you ready for the reputation  you’ll have as a “Free spoken” person?  Defined as  “ Given to speaking freely without reserve, frank and outspoken”, the term was first used in  1625.

That was a full one hundred and sixty four years before there was a right to do so. I wonder how they would define it today.