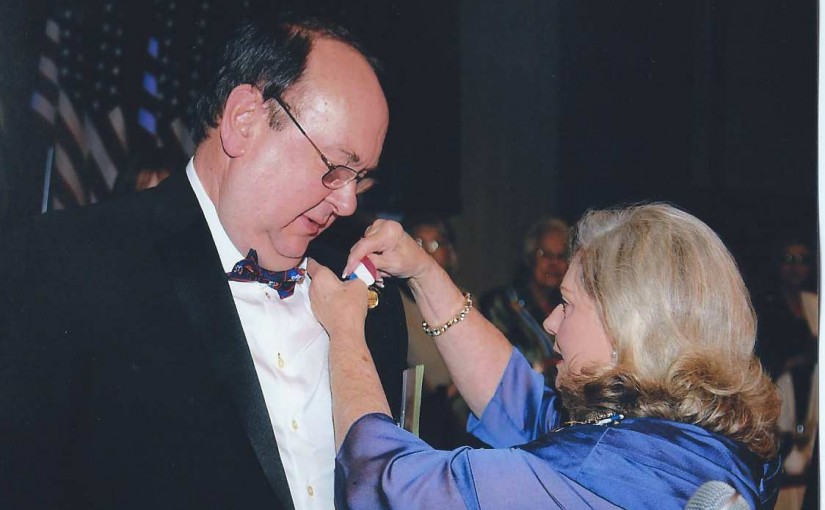 I remember the first time my eyes locked with his. It was in his courtroom the 11th District Civil Court of Harris County, Texas. I stood before him at the bench, with my right hand raised while he gave me the Court Interpreter’s Oath. This is how our professions were first intertwined, both pivoting on the same respect and dedication to the U.S. Judiciary.

Many people don’t realize that every U.S. court maintains original documents and  records from all cases and business filed with the court – back to the date the court was founded. This translates into hundreds of years of evidence in the form of testimony, maps, affidavits, personal identifications, tintype photographs,  earliest of business records that date back to the 1700s. Try and picture a land grant request  ( in Spanish) by Stephen F. Austin before Texas’s independence from Mexico,  petitions by slaves suing for their freedom and winning (the plaintiff signed with an X ) all the way to  the present generation when John Lennon’s doodles made  while attending Yoko Ono’s child custody case were included in the records of that trial.  Since evidence then, as now, is admitted after inspection for veracity, you have history being told of every aspect of life, from personal, to commercial to national events.

But  if not preserved, all of that will be shredded or disintegrate. 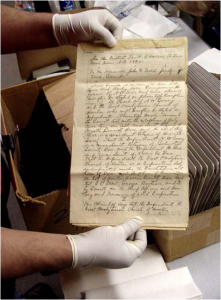 The time constraints on a Judge are extensive.  Judge Mark Davidson has had an outstanding judicial career, serving as judge of the 11th District Court for twenty years  before his retirement in 2009 and on into his appointment as Judge of the MDL court for the Asbestos litigation.  But in the 1990s when Judge Davidson sought out a century-old court document and was handed an envelope filled with yellow colored confetti , the result of the ancient document  never having been preserved, he made the time to take action. Judge Davidson, William Kroger, a partner in Baker Botts law firm, and Texas Supreme Court Chief Justice Wallace Jefferson  headed the effort to preserve documents within Harris County leading up to the creation of the Harris County District Clerk’s Historic Documents Room, which opened to the public in 2006. The room holds documents from the late 1700s-1951, and is used today by  authors, filmmakers historians, judges, lawyers and the public  research.  Seeing the result of this project, the Texas Supreme Court mandated that the Historical Document Reading Room and the Historical Document Preservation Project were the model for all state courts across Texas should follow. A spring 2009 meeting with Justice Jefferson, Judge Davidson and Galveston County Clerk Latonia Wilson led to the creation of the Texas Court Records Preservation Task Force by the Texas Supreme Court. Then Judge Davidson worked with State Representative Sarah Davis to create HB 1559 and carry it to passage in 2011. The bill provided that court records, stored in courthouses across Texas, would receive temporary protection from destruction. So in his spare time, he identified the risk of the destruction of history, developed a solution and acted on it.

In 2013, I was named Chair of the Historical Preservation Committee of my chapter of the Daughters of the American Revolution and that’s how I learned about  the existence of the Historic Document Room in our Harris County Courthouse and that the court greatly needed help to protect them.

After meeting with Judge Davidson, I assembled a team of DAR members, all experienced preservationists, genealogists and history lovers to volunteer in the room all day twice a month to build a searchable database of every case filed since the early 1800s. We also transcribe the documents hand written ( with quill pen!), we raise funds for the preservation process and we give private tours of the room. I am now invited to speak to groups on the rich history we find and how they can help with this project.  My skills as an interpreter benefit because I also learn terminology and can analyze  the similarities of testimony given over 150 years ago. For the last three years I have been blissfully volunteering in Judge Davidson’s shadow.

Fast forward from the day he gave me the Interpreter’s Oath to March 2016 and the photograph you see. Judge Mark Davidson is being awarded the National Medal for Historic Preservation before a packed room of dignitaries including his colleagues named above and yours truly.  I proudly nominated him because he obviously earned it.  But I was also personally motivated because he showed me how to make time for a good cause while maintaining respect and dedication to our profession.

Look for more posts on my discoveries among these treasures.